Such treaties, including the Royal Proclamation of 1763, established that indigenous bands have some of the features of modern nations: control over their agreed-upon territory and its resources, de facto citizenship and the right to govern themselves. For the past 40 years, Canadian courts have recognized these treaties (and land claims yet to be settled) as legally binding; they became part of the Constitution in 1982.

That means that there is no question indigenous peoples have a right to be self-determined nations. But what kind of nation? A full-fledged Westphalian state? An ethno-territorial nation like Scotland and Wales in Britain, or Quebec in Canada? Or some less concrete form of nation built on traditions?

Doug Saunders is a member of Your Canada, Your Constitution’s Patrons Council. 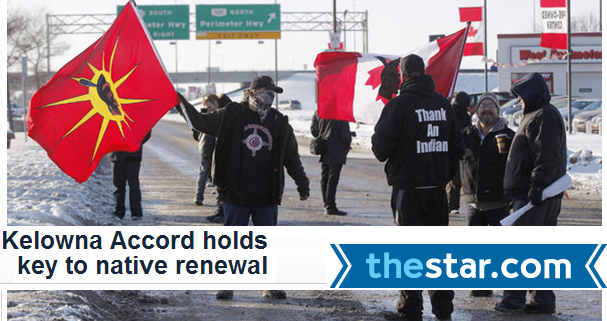 To take ownership of this idea, the current government should take the Kelowna Accord model and go bigger: reopen negotiations and address a number of priorities that were left out of the original accord, such as the situations facing aboriginal women and aboriginal peoples living in urban centres.

A new Kelowna Accord has the potential to be transformative for this country. Not only could it radically alter the Crown’s relationship with aboriginal peoples, it could significantly improve aboriginal standards of living and unlock an important source of economic wealth in this country.

The Royal Commission on Aboriginal Peoples (RCAP) was established in 1991 and engaged in 178 days of public hearings, visiting 96 communities, commissioning research and consulting with experts. In 1996, the RCAP released a five volume report of findings and recommendations. The central purpose of the RCAP was to figure out what went wrong, how it went wrong, and what can be done to correct the problems identified. As the report asked, “What are the foundations of a fair and honourable relationship between the Aboriginal and non-Aboriginal people of Canada?”

A lot of people seem to feel lost when it comes to the huge diversity of issues faced by Aboriginal peoples in Canada, and with the obviously dysfunctional system of relationships between indigenous peoples and the broader Canadian population. This is why I think the RCAP is so incredibly powerful and important. Much work has already been done to come up with practical solutions to identifiable problems. No wheels need be reinvented here. 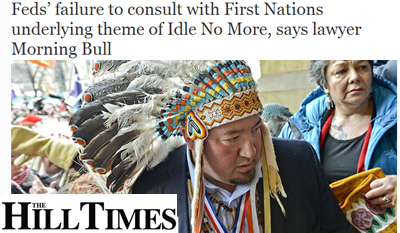 The Aboriginal Affairs and Northern Development Department has an “Aboriginal Consultation and Accommodation” guideline for federal officials “to fulfill the duty to consult,” last updated in March 2011.

In September 2007, the UN adopted the Declaration on the Rights of Indigenous Peoples, which set out that states have an obligation to consult with First Nations and provide “free, prior and informed consent.” The Supreme Court has made a number of decisions to affirm a provincial and federal duty to consult.

Should a new Canadian Constitution more fully and specifically set out aboriginal self-government rights and responsibilities (as the 1992 Charlottetown Accord partially proposed)? You can send a letter letting key politicians across Canada know what you think HERE.