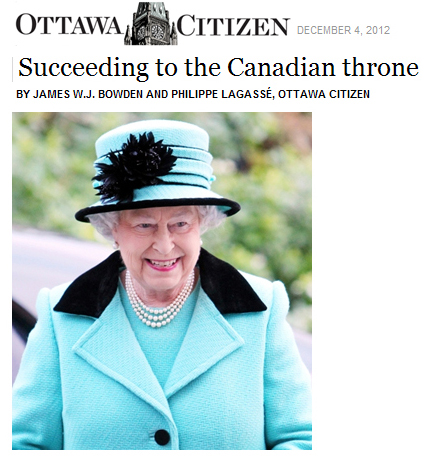 According to s. 41(a) of the Constitution Act, 1982, any amendment to the “office of the Queen” requires the unanimous consent of Parliament and the provincial legislatures. Arguably, the succession to the throne touches on the office of the Queen because the Crown is a corporation sole.

The Crown as corporation sole means the office and office-holder, Crown and Queen, are conceptually divisible but legally indivisible. The office cannot exist without the office-holder; the hereditary principle of automatic succession ensures that the Crown immediately transfers to the next person in the line of succession upon the demise of the sovereign. The Crown is never disembodied, as it were.

Succession must therefore pertain to the office of the Queen because any change to the rules that govern the line of succession affects who will one day personify the Crown, and because the office and office-holder are one and the same under the law.

Of course, admitting that succession falls under s. 41(a) invites all sorts of unwanted political complications. It would allow any provincial legislature to block or slow a change to Canada’s rule of succession

Should a new Canadian Constitution recognize historical ties to the British monarchy and Commonwealth but end the monarchy’s role in Canadian governments (as a majority of Canadians want) at the time of succession from the Queen to the next monarch? You can send a letter letting key politicians across Canada know what you think HERE.